The History of HCG and Weight Loss

Human Chorionic Gonadotropin, or hCG, is comprised of 244 amino acids.  It is produced in large amounts in a pregnant woman’s placenta, extracted from her urine, and historically used, in part, for the treatment of infertility in females to help induce ovulation.  When males are given much lower doses than would be given to a female for infertility,  hCG acts as a precursor to increase low testosterone levels. 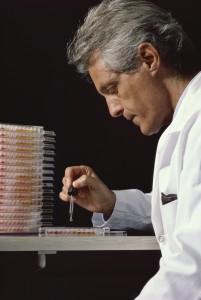 While treating adolescent boys’ low testosterone levels with hCG,  Dr. Simeons observed they began to slim down and began losing abnormal belly fat.  Knowing that hCG positively affects the hypothalamus, he hypothesized that this area of the brain was responsible, in part, for the regulation of normal and abnormal fat.

Over the next 10 years, Simeons experimented with specific amounts of hCG and specific foods.  He observed and documented that when both the correct amount of hCG and his food plan were followed as he had designed, both males and females had the ability to lose extraordinary amounts of abnormal fat in relatively short periods of time as compared to diet and exercise alone.

As word spread about Dr. Simeons work with hCG and dieting, Doctors and other Health Care Professionals from around the world traveled to Rome to learn more about his work.  Due to this extraordinary interest, in 1967 he published Pounds and Inches Manuscript, a New Approach to Obesity to help Healthcare Professionals and lay people alike, better understand his findings.  Following his publication, so-called “Fat Clinics” mushroomed all over Europe and the US.

Over the years, the HCG Diet popularity declined, mostly due to the attrition of practitioners who believed in and understood Dr. Simeons’ work.  Even though there were several HCG Diet studies conducted in the mid 70s, these studies didn’t follow Simeons’ protocol exactly and Simeons’ HCG Diet never received FDA approval for better abnormal fat loss results than common dieting.

In 2007, Kevin Trudeau released a book called “The Weight Loss Cure, What THEY Don’t Want You To Know”, which included enough information about the hCG Simeons diet to again create interest in Dr. ATW Simeons original work.  Shortly thereafter, a few ‘pioneer’ Professional Clinics in the US began offering hCG for weight loss.  As more people started reading “The Weight Loss Cure” and interest stirred again, the general public became eager to find a ‘cure’ to weight loss and began doctoring themselves because they could not find Doctors offering the HCG Diet.

People began ordering hCG from websites based in India, Canada and other questionable sources in an attempt to try the HCG Diet. YouTube videos began criticising medical clinics that were offering the HCG Diet saying that medical intervention was unnecessary and expensive.  An internet HCG Diet Q & A Yahoo Group was formed, comprised mostly of people wanting to try to do the HCG Diet who could not find Professional supervision or believed the ridiculous claims that the HCG Diet can be done without proper Professional Healthcare supervision.  Most were purchasing hCG from outside the USA and needed information as to how to mix hCG; administer injections; and were seeking a source to gain competent answers. It was moderated by lay people, some of whom had completed the HCG Diet, but were well out of their scope of expertise to be offering healthcare supervision. Eventually, HCG Diet-related product merchandisers joined the group and it became fairly commercialized with many trying to do nothing more than sell their hCG related products to people in the group.

Around this time, homeopathic hCG began being successfully used around 2008 by many Naturopathic Professionals as an alternative to hCG prescription injections.  However, shortly thereafter, a large  manufacturer of homeopathic hCG allowed lay people to purchase wholesale hCG and sell to anyone without the necessary professional knowledge and experience needed to oversee HCG Dieters.  That incident was the start of the rampant, uncontrolled, non-regulated selling of homeopathic hCG products on affiliate marketing websites, eBay, Amazon and the likes.  Coupled with blatant false claims copied from Kevin Trudeau’s book THE WEIGHT LOSS CURE”, the HCG Diet again had created enormous controversy and confusion. Even though HCG Diet internet sites mostly started from HCG Dieters who wanted to help others successfully complete the HCG Diet, it became extremely commercialized through 2010 and 2011 with websites and manufactures selling bottles of homeopathic hCG without regard for Professional Healthcare providers. Websites sprung up on a daily and almost hourly basis selling hCG while keeping their location and identity hidden.

Since 2009, The HCG Diet Council’s goal has continued to strive to standardized HCG Diet information and to help train Healthcare Professionals to oversee HCG Dieters.